We had a great Veterinarian Party this weekend.  Princess told me quite a while ago that she wanted a Veterinarian party and her plan was to have pens in the yard to hold everyone’s real pets.  Yikes!  I didn’t really say anything about it at first, hoping she would not remember and I could talk her into something else, but she did remember.  So, with only a few weeks to go, I was trying to back pedal with her and get her to agree to a different plan.  We agreed to have everyone bring a stuffed animal and they could give them check-ups.  As a result of travel and illness, I wasn’t able to shop for anything until the night before the party.  To say I was worried would be an understatement.  I prayed before I left that God would guide me and help me to find the things I needed, especially since one of the items was pretty specific.  I believe He did just that.

Princess wanted to buy a little dog in a pet carrier at Toys R Us a few months ago and I wanted to use it in my party plan, but I wasn’t sure they would still be carrying them.  When I arrived at the store, I couldn’t find any.  I finally found one broken one, but I needed five.  Just as I was about to call Ryan and see if I should at least get the broken one for her, an employee walked up and asked if I was finding everything.  I asked if there was any way to see if there were any more of these little dogs in the store.  He scanned it and said there should be four more…exactly the number I needed.  We walked to where they had been, but neither of us saw any.  He looked at his hand-held to confirm, and realized there was a brand new box of six in the back room.  Amazing!  A brand new box of a clearanced item.  What are the chances?  The rest of the night went similarly.  I usually plan for weeks, if not months, and shop over time to get the things I need for my theme.  I found everything on my list, including a trip to the grocery store for the food, in three hours!


When the guests arrived, they received a Dr. Badge with their name on it.  I ushered them into the “Exam Room” where they put together their “Dr. Kit" which consisted of a White Bag with a Red Cross on it filled with a “syringe” (really a CVS oral medicine doser…I just happened to have six lying around from past prescriptions), Sports tape (“casts”), Popsicle sticks (for tongue depressors and splints), a small sponge for cleaning wounds, two Exam Gloves and Band-aids.  We also had a bin with all the medical equipment I could find from our dress up box, stethoscopes, otoscopes, thermometers, blood pressure gauges, etc.  We brought in the food scale to measure weight, as well.  Once everyone’s bags were set up, we did the “Pet X-Ray Quiz” on the Animal Planet website.  Then, everyone got their stuffed animals from the “waiting room".  I gave them some “Patient Charts" to fill out for their animals.  While they were doing their checkups, I had Ryan call my cell phone so it would ring.  I answered it and pretended that someone was telling me about some puppies that had been abandoned near our house.  I told all our Veterinarians that we needed to go get the puppies and give them a checkup to make sure that they were healthy.  I gave everyone an empty pet carrier and we headed out to the bushes at the end of our yard.  Everyone took a puppy and brought it in to give them a checkup.  They then picked names for their puppies and made collars for their puppies out of ribbon held together by Velcro and decorated them with jewels and foam stickers.  I then left them to play in the exam room with their new doctoring skills.  They played for quite a while and then took their patients outside to play with them.
Princess had asked to help with her cake and I let her pretty much do everything on her own.  I turned on the oven, reminded her of what to do next whenever she had a problem and put the cake in the hot oven.  Other than that, she measured, mixed and followed all the directions herself.  She also decorated the cake with Ryan.  She decided she wanted white frosting with a Red cross in the middle, and she picked animals and a “Veterinarian” from her toy box.  And…the cake tasted great! 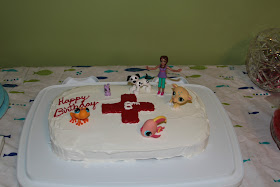 My Thoughts on the Day


I was really worried that this would feel like the “consolation prize” of birthday parties for Princess, as we did not have real animals.  Seeing her face when I pulled out the pet carriers was priceless…I knew she remembered it from the store.  Tonight, when it was time to clean up the Exam room, I heard the kids saying, “It’s time to clean up…for now.  We will play again tomorrow!”  It is these moments in life when I remember that God delights in blessing us, even in the little things.

As an aside, even if you are not planning a Veterinarian Party, this is a great activity for kids.  I saw a lot of websites that used the idea in “Pretend Play”.  I couldn’t find any printable Patient Charts to use for today.  So, I threw one together using ideas from the internet at the last minute.  I thought I would share mine here in case anyone wanted to use it.  It is not perfect, but the kids still really enjoyed it.  I can see many of these charts being filled out by my kids in the near future. 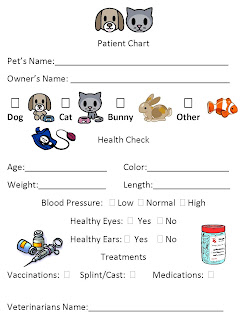 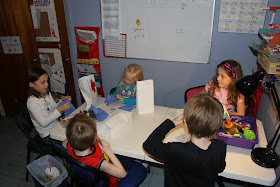 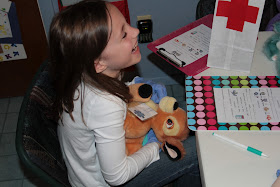 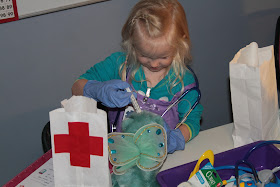 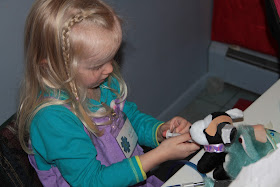 All comments welcome, but moderated to prevent ads from showing up as comments. It may take a short while for your comment to be visible.